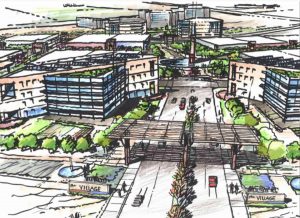 Rio Rancho has long been known for its high-tech workforce, particularly those working at computer chip manufacturer Intel.

But city officials and an out-of-state developer are hoping to make the City of Vision a hotspot for a different industry.

On a 65-acre plot next to the Presbyterian Rust Medical Center, California-based real estate management and development firm Geringer Capital is looking to build The Health Village at Rio Rancho — a proposed multi-use development consisting primarily of medical tenants, along with some retail space.

The proposed project is being planned by Tennessee-based Easter Healthcare Consulting. Dallas-based engineering and architecture firm Huitt-Zollars is also working on the project.

The site of the proposed development is owned by Sandia View LLC, an affiliate of Geringer Capital.

The project could help fill an opportunity gap for a well-trained medical labor pool already in town, and could help stop educated people from leaving the area, Hull said.

The departure of some of New Mexico’s educated and talented workforce has become a major concern for some New Mexicans. While New Mexico’s population has remained relatively stagnant in recent years, 42,000 more people left the state between 2011 and 2015 than entered it, according to data from the UNM Bureau of Business and Economic Research.

Geringer Capital Chairman and CEO Robert Geringer said the cost of the Health Village could be in the hundreds of millions, but was unable to provide further specifics as the project is still in the planning stages. Geringer hopes to submit a site plan to the city of Rio Rancho in the next four months, said Bob Feinberg, one of the Realtors with Colliers International who is representing Geringer on the project.

While the development would be geared mostly toward health-focused tenants, about 15 to 20 percent of it would be for retail, Feinberg said.

“We believe the epicenter of this is feeding the needs of Presbyterian Rust,” said Paul Rogers, senior vice president of Colliers International’s health services group.

While the city of Rio Rancho has held a handful of forums concerning the project, Hull said it is still conceptual.

Merging medical and retail space has become a rising trend in commercial real estate, with at least one local provider jumping on the bandwagon.