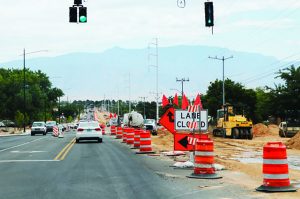 Rio Rancho Mayor Gregg Hull said the first phase of construction on Southern boulevard is right on schedule. This is a view of the construction at Country Club Road and Southern Boulevard.
(Stephen Montoya/ Rio Rancho Observer)

RIO RANCHO, N.M. — Well into his second term as the mayor of the City of Vision, Gregg Hull said he is proud of the road work he’s been able to accomplish in the short time since he first came into office.

Hull, who brought a road bond before voters during the beginning of his first term, said he knew how dire the road situation was in Rio Rancho at that time.

“You have to step back a little bit further and see why the road bond was killed in the first place,” Hull said.

In 2011, he said, the general population didn’t feel like the city was using road bond funds in a manner consistent with helping improve roads.

“Fast-forward to 2014, when fixing infrastructure was one of my biggest priorities when I ran for office, primarily because we needed to fix our roads and water lines,” he said.

Hull said after he was voted into office, he realized the city budget had no funding for roads.

“Even if the money is there, it takes time to cue up the road-repair operations, and if the money is not there, no one’s doing the engineering and nothing is being prepared,” he said.

Hull said by 2015, a community survey indicated that roads were the No. 1 concern of Rio Rancho residents.

“I brought forward a resolution to put a $9 million road bond on a ballot that would be funded by a minimal tax increase, which was $6 and change per $100,000 worth of value of a resident’s house annually,” he said.

He said he cast the tie-breaking vote to move forward with placing this bond on the ballot.

According to Hull, 63 percent of voters approved the bond.

Now that the city had funding to help improve the roads, Hull said he thought the two projects that needed the most attention were Sara Road and High Resort Boulevard.

“The estimates to get both of those roads done were at $9 million,” he said. “The reality was that we came in $3 million under cost. So what we did that money was roll it over onto Southern Boulevard.”

Without that $3 million, Hull said, the first phase of the Southern Boulevard project would’ve only made it from NM 528 to May Circle instead of Golf Course Road.

“That would’ve been disastrous for those businesses to have to ramp up for two different road construction projects,” he said.

While this was going on, Hull said the city went about finding money in the general fund to finance crack-patching, because the city cannot use road-bond money for repair and maintenance.

The city also passed a resolution at that time that 70 percent of any budget surpluses at the end of the year were to go to road repairs.

“Every year I’ve been in office, we’ve ended up with budget surpluses ranging between half a million and upwards of $1.5 million,” he said.

Hull said the city used some of those funds to buy road equipment to handle its own crack-patching without hiring an outside party.

Roads reconstructed through the road bond are picked based on traffic count, he said.

“You want the road with the biggest portion of traffic so it will serve the taxpayers more,” he said.

The second factor Hull pointed at was infrastructure under a road.

“We’ve paired up utility dollars at the same time to make sure that while we have the road ripped up, we’re replacing all the infrastructure underneath that road at the same time,” he said.

“We would go there and fix the water main at $50,000 to $60,000 a pop, and people would have to go without water for quite a few hours while crews are fixing the main,” he said. “What’s amazing is that we were able to fix High Resort under budget even after we fixed a water main break for $60,000 four weeks before the actual construction began.”

Hull said the city has done a lot of road work despite only having access to road bond funds for three years.

As of right now, 45.39 miles of roadway have been crack-patched in the last two years, according to city documents.

Approximately 19.33 miles of roadway improvements have been completed or are in progress since 2014, said city spokeswoman Annemarie Garcia.

As far as the work on Southern Boulevard, Hull said everything seems to be on schedule for its estimated completion by October.

“We will not have the funds for a while to move forward with the second phase; however, we are looking at moving west of Unser (Boulevard) and doing a mill and inlay on Southern from Unser to Rainbow Road,” he said. “The infrastructure is good under the road, so all we have to do is recycle the asphalt, which will help even everything out.”