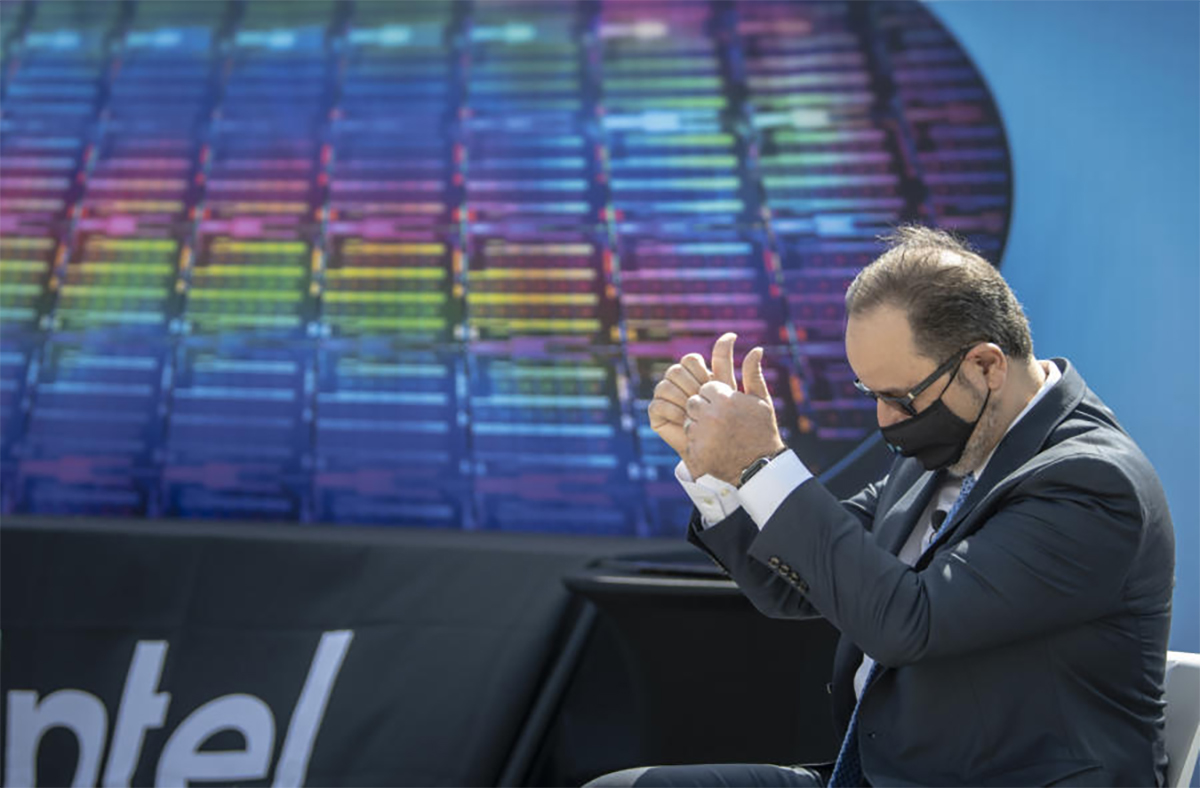 Intel Corp. announced on Monday morning its first multibillion dollar investment in Rio Rancho in more than a decade to convert its local factory into a global manufacturing hub for the company’s new “Foveros” technology.

Company executives unveiled the $3.5 billion investment at an outdoor news conference at the plant with Gov. Michelle Lujan Grisham and other state and local officials. The investment will generate 700 new high-paying permanent positions here, plus about 1,000 construction jobs.

It’s the largest such commitment to Intel’s New Mexico operations since at least 2009, and the largest single investment here to date since the company opened the Rio Rancho plant in 1980, Intel executives told the Journal.

New Mexico will provide Intel $5.75 million in Local Economic Development Act funding for the expansion, including $5 million from the state, $500,000 from Sandoval County as fiscal agent for the project, and $250,000 from the City of Rio Rancho, pending approval by the city council.

“Intel’s $3.5 billion investment in New Mexico will create 700 new jobs in the next three years and establish the Rio Rancho campus as the company’s domestic hub for advanced semiconductor manufacturing,” Lujan Grisham said in a statement. “… The state and Intel have a 40-year partnership, and today, with innovative economic development tools and global demand for this technology, we can celebrate a new generation of workers and job growth at Intel’s New Mexico manufacturing plant.”

The company will upgrade its current 350,000-square-foot manufacturing facility to manage a new chip-packaging architecture called Foveros that Intel first unveiled in 2018.

That new technology is based on stacking computing chips on top of each other, creating a three-dimensional, compact package for super-fast computation that uses much less space. That lowers manufacturing costs and energy consumption while providing high-performance data processing for today’s tiny, super-light-weight devices.

The company used the new packaging architecture to create its first fingernail-sized 3D-stacked chip last year called Lakefield, which measures just 1 millimeter high and 12-by-12 millimeters around. Now, Lakefield and other advanced semiconductor devices that could be made with Foveros technology will be manufactured at the Rio Rancho plant once the facility upgrade is finished, said Intel spokesperson Linda Qian.

“The new investment will increase manufacturing capacity for this new breakthrough technology,” Qian told the Journal. “Planning will begin immediately. We expect to start construction later this year and be production-ready in late 2022.”

The company won’t erect a new building, but rather re-tool and modernize its existing facility.

The investment reflects a sharp turnaround for the Rio Rancho plant that began in 2017, when Intel began converting the local facility from primarily a chip-manufacturing operation into an “innovation hub” for new, cutting-edge technologies that support the company’s evolving global operations.

That gave Rio Rancho a new company niche in silicon-photonics components, which are now used in Intel transceivers and receivers for data centers.

Then, in 2018, Intel transferred development of a new memory technology to Rio Rancho called 3D XPoint. It’s a new type of engineering architecture that places data memory and storage much closer to microprocessors inside computers or data centers, allowing information to transfer back and forth at much faster speeds.

And more recently, Rio Rancho became the key corporate site for another technology breakthrough – the Embedded Multi-Die Interconnect Bridge, or EMIB. That’s basically a new chip that sits on top of processing, or memory chips, to connect and transfer data between them.

Now, when combined with Foveros, the new technologies give Rio Rancho a unique role in Intel efforts to simplify and optimize semiconductor packaging, memory and connectivity, making the local facility a critical cog in Intel’s domestic and international operations, Qian said.

“We’re not making basic chips, or computer processing units, in New Mexico anymore,” Qian said. “We’re making new, differentiating technologies that from the big-picture standpoint set us apart in the development of packaging, connectivity and even software breakthroughs that help drive new advancements in the company.”

The focus on innovative technologies has reversed a frank decline in Rio Rancho operations that began in 2013, when Intel employed 3,300 people.

At that time, major investments in new chip-making technology were bypassing New Mexico for other company sites in the U.S. and overseas. In Arizona, for example, Intel opened a new $7 billion manufacturing facility last year. And in March, it announced another $20 billion investment there to build two more factories. 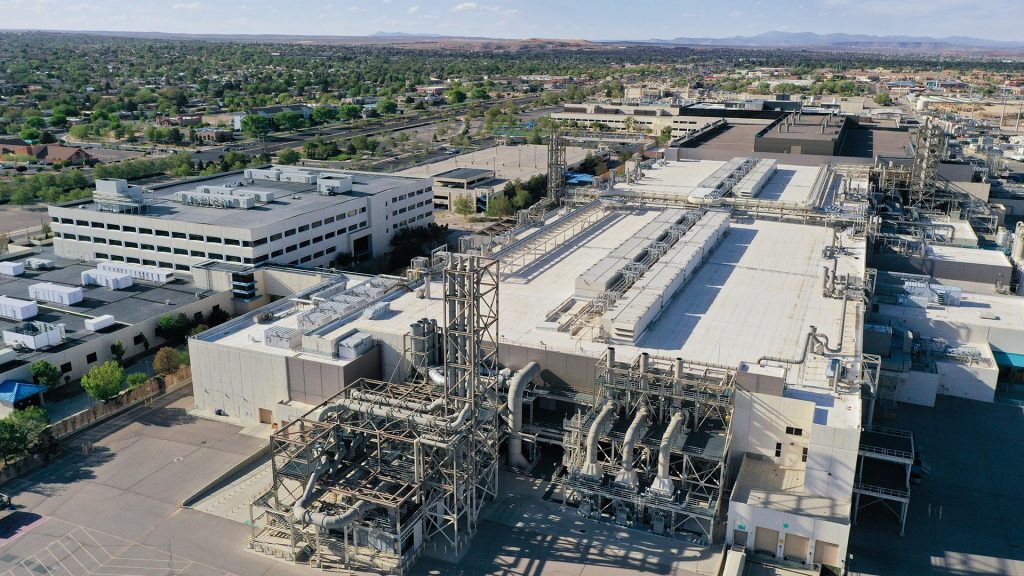 But in 2018, Intel began hiring again in New Mexico, re-building Rio Rancho back to more than 1,800 employees as of last year. Now, with another 700 projected under the company’s latest investment, the local workforce will climb above 2,500 in the next three years.

“We are proud to have invested in New Mexico for more than 40 years and we see our Rio Rancho campus continuing to play a critical role in Intel’s global manufacturing network,” said Keyvan Esfarjani, Intel’s senior vice president and general manager of manufacturing and operations.

Apart from direct LEDA funding, Intel’s latest investment will also be boosted by a 50% rebate on gross receipt taxes generated during construction, thanks to a new law signed in April by the governor that expands LEDA’s economic development impact by allowing state and local governments to share half of the GRT with companies to offset the costs of very large projects. That rebate is expected to save Intel about $14 million on construction and infrastructure expenses at the Rio Rancho plant, something that helped Intel finalize its newly announced plans here, the governor said.

“With this exciting development, we are already seeing the benefits of this year’s legislation expanding LEDA, generating high-quality and high-paying jobs for New Mexicans,” Lujan Grisham said.

“We’re very excited about Intel’s renewed investment in our community,” Hull told the Journal. “It will mean a lot to local businesses, especially now as we’re emerging from COVID. Local businesses need a shot in the arm, and this is just the thing to do it.”

Intel operations by the numbers
$1.2 billion
Annual economic impact in NM
$200 million
Spent annually on local products and services
$16.3 billion
Invested in NM since 1980
$598,000
In property taxes paid to Sandoval County in 2020