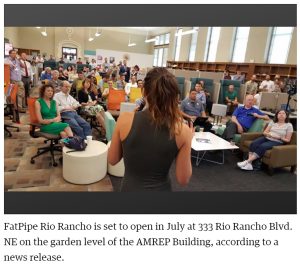 FatPipe Rio Rancho, set to open in July, will be located at 333 Rio Rancho Blvd. NE on the garden level of the AMREP Building, according to a news release. The company says it will be the first collaborative co-working space to open in Rio Rancho.

“We are excited to welcome such an innovative job creation engine to Rio Rancho because they will offer resources and support to help grow our existing and future entrepreneurs, who are a critical component to our economy,” said Rio Rancho Mayor Gregg Hull in the release.

FatPipe was founded in 2014 by serial entrepreneurs Stuart Rose and Lisa Adkins. The company’s first location, FatPipe ABQ at 200 Broadway Blvd. NE, is in the former library of the old Albuquerque High School.

FatPipe ABQ COO and Director Lisa Adkins told Business First about plans to expand statewide back in 2016, saying the company’s biggest targets for expansion were Santa Fe, Taos and Las Cruces. The idea was to have a statewide FatPipe network, so entrepreneurs who belong to FatPipe can work while traveling around the state.

FatPipe ABQ is No. 2 on Business First’s 2018 list of New Mexico Co-working Spaces.

Last year, FatPipe ABQ was named one of the country’s best co-working spaces by Inc. Magazine.

The co-working space plays host to many events, including the weekly One Million Cups where entrepreneurs pitch their startup ideas. One Million Cups recently revealed the promotion of its new lead organizer, Sonja Dewing, at FatPipe ABQ.

FatPipe facilities offer members ready-made work spaces with furniture, multimedia equipment, IT infrastructure and a fiber “fat pipe” to the Internet, according to the release.

The monthly rate for full-time access to FatPipe space is $300. There are also options for two days or three days per week at $150 or $200 a month, respectively.

In February, a study commissioned by the Sandoval Economic Alliance revealed that Sandoval County, home to Rio Rancho, is ahead of pace on innovation, boasting patents issued at three times the national average across 15 technologies, indicating a large presence of innovators in the community.