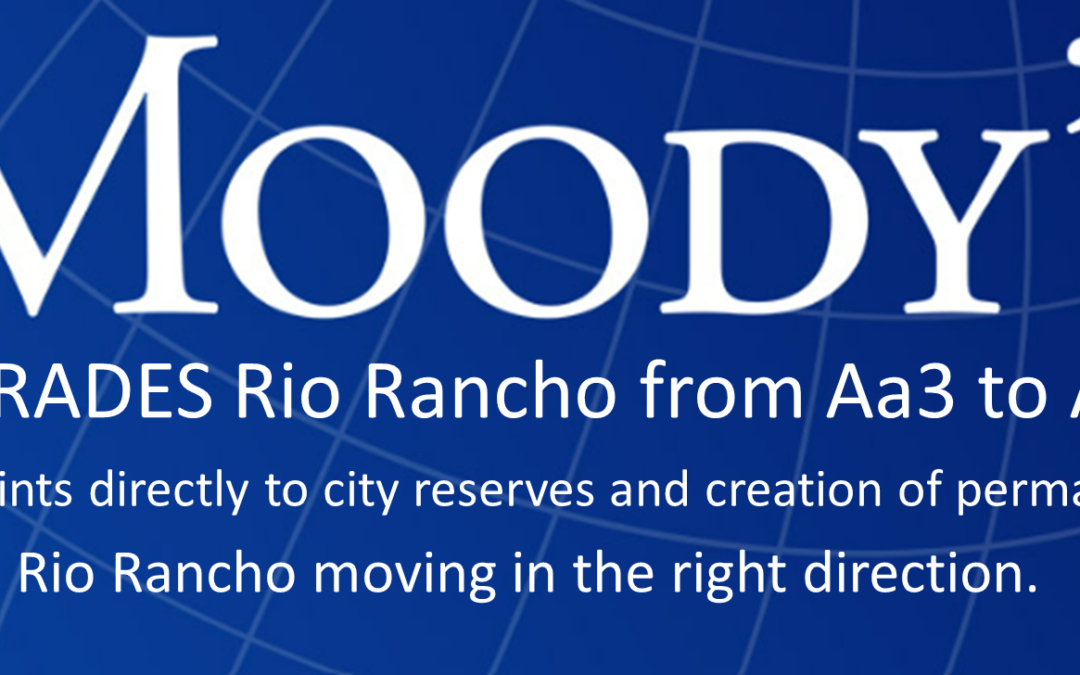 Three-term Mayor of Rio Rancho, Gregg Hull, who has been the driving force behind efforts to increase Rio Rancho’s Moody’s Bond Rating, announced Friday, April 22, 2022, that Moody’s has, in fact, done just that, upgraded Rio Rancho’s Bond-rating. Two of the major factors, according to Moody’s were the adoption of a minimum reserve policy and the establishment of a permanent fund, which the citizens of Rio Rancho approved on March 1, 2002. Mayor Hull spent the last six months with the people of Rio Rancho explaining why the city would benefit dynamically financially from the permanent fund and the minimum reserve policy.

“A resolute commitment to sound financial practices and policies has been our focus,” said Mayor of Rio Rancho Gregg Hull. “Careful planning, cautious spending, and targeted investment in city services have enabled the city to establish a “reserves policy” that is nearly 3 times state minimum and through voter support, establish the creation of a permanent fund that is unique in all of New Mexico.  This will protect the financial strength of Rio Rancho for future generations, leaving our children a legacy of savings and not just piles of debt. Thank you to Moody’s for recognizing our hard work and commitment to financial excellence.”

How will the upgrade of Rio Rancho’s Bond rating by Moody’s help the city – in real terms?

Simple: Rio Rancho will pay less in interest if it wants to invest, and when the city issues bonds itself, it will pay lower interest rates to bond-buyers, saving the city substantial borrowing costs.

Why is Rio Rancho in a better financial place than any time in the last 25 years?

Regarding the above question, please see points 1-6 “Moody’s Ratings Rationale. Two major elements that will help Rio Rancho are the establishment of the permanent fund.  A permanent fund works to create more money to pay for government public services without a required tax or fee increase. This fund will allow the city of Rio Rancho to set aside $10 million into a permanent fund to be invested — under strict guidelines — for future growth.  The decision to establish a permanent fund was dependent only on Rio Rancho voters being able to modify the investment in the future.

Where Did the Money Come From?

The City of Rio Rancho has $10 million in one-time, unanticipated revenue due to actual revenues exceeding COVID-19 economic projections, the historic number of homes built in Rio Rancho since 2020, and the City staff’s conservative annual budget planning. The money stems from economic activity occurring within Rio Rancho that the local government uses for general government purposes and initiatives.

The City will take $10 million and put it into a permanent fund (savings account), and invest it. Each year, half of the interest money generated would go toward funding public services such as roads, police, fire response, emergency medical services, parks, and libraries. The other half of the interest generated would be put back into the permanent fund. Over the years, the permanent fund and money available will grow and grow. This will help address the public services needs of existing and future generations.

The GOULT upgrade to Aa2 from Aa3 reflects the following: